After 11 long months of political deadlock and childish bickering, Lebanon finally has a cabinet. Although some are satisfied just by having a cabinet and with it some illusion of normalcy, not many are happy with its composition. And in true Lebanese fashion, “what difference does it make anyway,” some will say: if it’s not the same faces on the cabinet table, then it is the same faces behind the scenes that brought them, and if there has been some alternation in portfolios (based on political affiliation and sect), it all remains part of the same game of sectarian and power politics that has brought so much misery to the majority of the Lebanese throughout the years, and will continue to do so in the years to come… 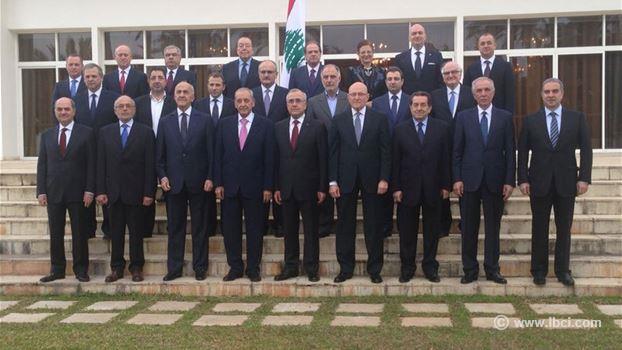 When it comes to the business of the nation, the Lebanese shouldn’t grant politicians the benefit of the doubt anymore, very few deserve it. But the least these people can do is listen. As a reflection of the country’s mood, most of which oscillates between the slightly hopeful and the extreme sarcastic hopelessness, here are some welcome questions and self-evident truths for the newcomers. This is really what it all boils down to people, and in no particular order:

Prime Minister Tammam Salam: Alf Mabrouk. Had you not been bald, all your precious hair would have fallen by now. Bring on the white carnation already and everything is gonna be alright (or so you wish…)

Deputy Prime Minister and Defense Minister Samir Mokbel: Lucky man, to whom alternation doesn’t apply (also deputy prime minister in the previous cabinet) and gets a new ministry too. So will you finally tell us what are the strings to which the  $3 billion Saudi grant to the Lebanese Army are really attached to?

Minister of Telecommunications Boutros Harb: for someone who’s already being mocked for not being able to embed a link on Twitter, this is going to be fun to watch. Question is, will you finally be able to bring Telecom Director General and protegé of your so-called March 14 allies Abdel Menhem Youssef under control?

Minister of Agriculture Akram Chehayeb: nice to see you again, I guess it really is the end of comrade Ghazi Al Aridi.

Minister of Public Works and Transportation Ghazi Zeayter: well, I guess they wanted some continuity in names here (the previous minister being Ghazi  Al Aridi). I hope that doesn’t apply to the workings of the ministry too, mainly regarding the numerous allegations of corruption involving Al Aridi.

Minister of Energy Arthur Nazarian: you may think you are the Energy Minister, but you may just find Gebran Bassil hidden in a secret drawer of your new office ready to help you out with your new job.

Minister of Tourism Michel Pharaon: your family wealth, you living off your “political family” title and all that won’t bring tourists back to Lebanon, but you can try to be useful in some other way I guess.

Minister of Finance Ali Hassan Khalil: welcome, welcome to the Ministry of Finance, warm welcome. Key words here are transparency, national accounts, budgets and the boring stuff like that. Does Mr. Berri have any recommendations for you as you settle in your new office?

Minister of State for Parliament Affairs Mohammad Fneish: gentle reminder, there is no parliament in Lebanon. It is illegal, it was illegally extended and it is currently out-of-order. #notoextension

Minister of Foreign Affairs Gebran Bassil: the #BlameBassil hashtag isn’t going to die anytime soon, sadly, no matter where you go. In this ministry, however, the key word is diplomacy, you must have heard of that word before, no?

Minister of Health Wael Abu Faour: you aren’t getting a single day of rest now are you?

Minister of Industry Hussein Hajj Hassan: no, no, this isn’t about producing an ISO-compliant resistance, it is about a forward-looking strategy to shift Lebanon away from being a purely service-based economy. Can you do this?

Minister of State for Administrative Reform Nabil De Freige: good luck if you figure out where to start from, because both your allies and your political opponents led us to the administrative mess in which we live in.

Minister of Information Ramzi Jreij: again, what is it exactly that your ministry does?

Minister of Social Affairs Rasheed Derbas: I’m for sustainable development across Lebanon, but if you chose to focus solely on your hometown Tripoli for the time being, I’m all with you.

Minister of Environment Mohammad Mashnouq: in an ideal world, the work of this ministry would be even more challenging than that of the Ministry of Interior. So now, your only task is just to talk against the quarries, pollution, environmental degradation, climate change and pray that things will improve.

Minister of Displaced Alice Shabtini: we salute you as the lone woman in the cabinet, as a seemingly last-minute decision when they all realized something was missing. If the current situation remains as is in the country, you’ll be the minister of hundreds of thousands that have and will continue to leave the country. They’ll be displaced too, but may never want to come back to Lebanon again.

Minister of Youth and Sports Abdelmotleb Hannawi: your success or failure depends on whether you will go ahead with the investigation of Jackie Chamoun or not. Really.

Minister of Justice Ashraf Rifi: there is no uniform here, sir, and most of the work takes place in courts of law, not cells of lawlessness.

Minister of Economy and Trade Alain Hakim: the ministry could use someone who tries to run the ministry like a commercial bank (Hakim is/was assistant GM at Credit Libanais), except that the ministry doesn’t have any money in its coffers to do so.

Minister of Culture Raymond Arayji: it may not seem important today to save what is left of this country’s heritage, monuments and history, but many would thank you for it in years to come.

Minister of Education Elias Abou Saab: one of the few whose nomination makes sense, with a positive track record as the head of the Dhour Chweir Municipality and as executive VP of the American University of Dubai. If you get schools to sing your wife Julia Boutros’ songs and live them for a change, maybe there will be some hope for the future generation…

2 Replies to “A Warm Welcome to Lebanon’s New Cabinet”

Almost everything I need.
Although one can’t write about Beirut by living in a bubble, pretending that everything is alright for just a couple of hours, talking about fiction as if it isn’t inspired by our tragic reality and just having an enjoyable discussion with fellow readers is one of the things that manages to keep me sane in the abyss we live in.