In the aftermath of the events in Saida last week, pitting Sheikh Ahmad Al Assir in direct confrontation with Sayyed Hassan Nasrallah, the only thing that I could think about was my next blog post. I came up with what I believed was the best title for it, as used herewith[1]. However, I seemed unable to fill the post with anything other than the usual, yet always valid, criticism of the absurdity of Lebanese politics and the way we always seem to swiftly move against the current of modern times (so much so that we could earn yet another pathetic Guinness record for it).

Here you had Hezballah, 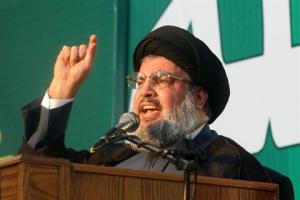 a long-established non-state actor, whose raison d’être had long expired, yet the strength, capability and influence gained along the way made it ever so difficult to disarm and retreat. And this, if only to protect what it thought was its rights and duty. On the other hand, an aspiring non-state actor Sheikh Al Assir

who maybe thought to benefit from the weakness of Hezballah’s main allies (Iran and Syria) to force change, even if through the same military means (though for the moment temporarily suspended) he criticizes his opponent of using. Both men of religion, with long salt and pepper beards, both potentially dangerous to their local communities and country in general, and both easily manipulated by political and financial forces beyond the borders of the land of the Cedars.

Indeed, Samuel Beckett could not have concocted a more absurd scenario, as the local Lebanese political landscape slides further into the realm of that of a failed state. I do not want to offer any solutions or groundbreaking insights and prospects of how both phenomena will evolve or come crashing to the ground. But if I may, and as a gentle reminder, whenever somebody criticizes the rest of the region for taking a step backwards in their quest for democracy – government by the people, not people of religion –and whenever someone mentions Lebanon’s long tradition of democracy – that is democracy, not theocracy – and whenever we hear voices telling us about our state institutions, security under control, and the rule of law, maybe we should ask them to explain themselves a little bit more, in view of all these developments…

[1] In reference to the “Battle of the Bands,” a contest in which two or more bands compete for the title of best band.