“In the implementation of its scheme to settle the Armenian Question through annihilation of the Armenian race, the Turkish government did not allow itself to be distracted.” – Paul Wolff-Metternich, German [Turkey’s ally at the time] Ambassador to the Ottoman Empire (1915–1916).

“Unfortunately, our wartime leaders, imbued with a spirit of brigandage, carried out the law of deportation in a manner that could surpass the proclivities of the most bloodthirsty bandits. They decided to exterminate the Armenians, and they did exterminate them.” – Mustafa Arif Bey, Interior Minister of the Ottoman Empire (1917–1918).

100 years since 1.5 million Armenians were systematically murdered and rooted out of modern-day Turkey,  and Armenians will always “Remember” and continue to “Demand.” They will remember the tragedy committed to their forefathers and demand recognition of what happened. 100 years since the first genocide of the 20th century and the successor-state of the perpetrators – Turkey  – still refuses to recognize what happened. Only 22 countries worldwide – Lebanon being the only Arab country among them – recognize the genocide. Well, but you know what they say “all genocides are equal, but some genocides are more worthy of recognition and attention and reparations to its people, than others” or something along those lines… 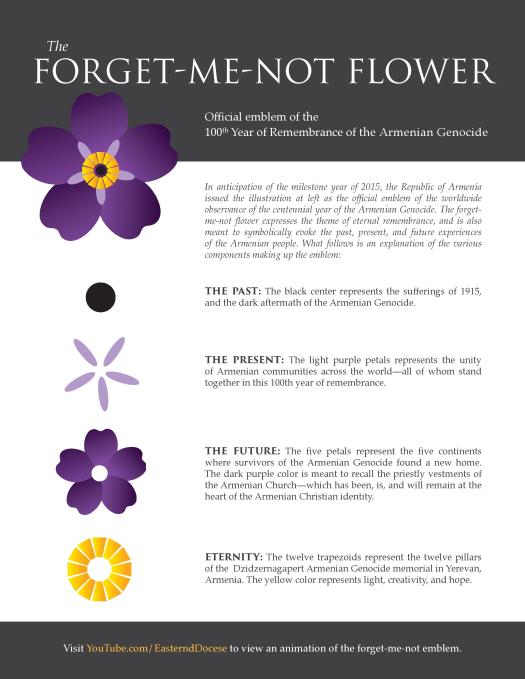 After 100 years, we “remember and demand,” but we also pay tribute to those who survived, without which there would have been no Armenian nation left today. There are thousands of stories of those survivors, passed down through generations, which have kept the memory of their struggle alive, in hope that it will never be repeated again. Following last year’s beautiful testimonial posted on Eye on the East Remembering the Armenian Genocide that I invite you to re-read today, the following is another part of the same story, told by another member of the family…

…so that it may never be forgotten, for it to never happen again.

I will not discuss the genocide itself. Many will talk about it and much better than I will. Some of those who lived it still talk about it to this day, to their children and grandchildren, so that the memories are kept alive. The media will splash it on their headlines, there will be demonstrations and maybe even incidents. The Armenians, specially the youth, will demand, yet again, for justice by the mere recognition of the genocide. So that an entire people, spread throughout the four corners of the world, be finally able to mourn their dead.

They will simply demand that the genocide be recognized, not only by the entire world, but by Turkey first and foremost, which remains in complete denial of what happened. After this, there will be forgiveness, not only for the executioner but mainly for the victims, whom will be able to pay their debt to their dead and make peace with their history.

I will tell a personal story: as I was once going through an album of the Armenian side of my family, I came across two old pictures in sepia and slightly torn at the edges. The first was that of an elegantly dress man with delicate features, sitting up straight, holding a oud. The second showed a young girl, with a look so sad it was tragic, dressed in white, with a crown of flowers and a sash that said ‘Tebi Abakay’ or ‘towards the future’.

The little girl was my mother-in-law and the man with the oud was her father. 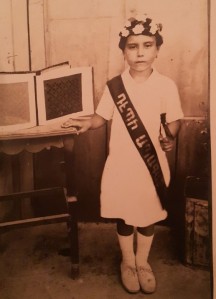 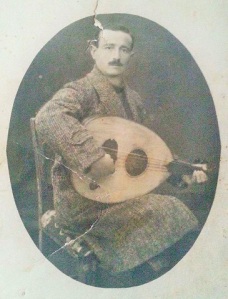 The little girl must have been 6 or 7 years old in the picture and had just escaped from the first genocide of the 20th century. Her family fled the city of Konya [in present-day Turkey] and arrived to Lebanon via Aleppo and Cyprus with another group of survivors.

Like many Armenians, her father was a shoemaker, a humble man who worked hard to provide for his family.  He died young, both from a disease his body could no longer overcome, as well as the tragedy he witnessed, too heavy for his soul to bear. After a long day at work, my mother-in-law once told me, her father used to have dinner, take a shower and dress up in his best suit. He would then grab his oud and play for hours, before hanging it back on the wall, so delicately and meticulously you would think it was part of a religious ritual. One day, the little girl asked him why he went into such trouble and dressed his best just for the oud. “The oud is a noble instrument,” he would answer, “and when we play it, we need to honor it by being clean and well dressed.”

That is when I understood that no matter what happened, I would always defend the Armenian cause.

Because they are a people who exemplify human beings in all their greatness and dignity.

A people with a glorious history, not written by barbaric conquests but genuine acts of bravery. A people forged by their true and unwavering Christian faith and brilliant civilization, as well as by their thinkers, philosophers, poets, writers, musicians and scientists. A peaceful and tolerant people, in view of their tormented history, always a victim and never an executioner. A people who lived their tragedies in silence and fought bravely, never doubting their faith, dignified in life as in death.

A people spread throughout the four corners of the world, who worked hard to make a living, never begged and always kept their heads held up high. A people with an untarnished reputation who never took up arms against the countries that welcomed them, never incited violence, never blamed the world for their problems and never attempted to invade anybody else.

A people of sad young girls who saw their loved ones die with their own eyes, yet continued to walk tebi abakay and elegantly dress men with delicate features who continued to play the oud to ease the pain of their existence. In silence, these exemplary citizens of the countries to which they now belong ask for only one thing today: the recognition of the genocide of 1.5 million Armenians, disappeared under Ottoman rule, victims of a genocide that is hidden, or rather denied, by a country that claims to be European and democratic.

“For when two of them meet anywhere in the world,” Armenian-American writer William Saroyan once said, “see if they will not create a New Armenia.” Here’s to all the new Armenias they will create…