Note: This is a translated and abridged version of Eye on the East’s post about Chile in Spanish. The original version can be found here.

21 years have passed since I left Chile, but the wave of memories that hits me at the sight or sound of anything that relates to it is still hard to resist. Maybe it’s the nostalgia of simpler days or the longing for a mischievous adolescence. The fact of the matter is that my appreciation for a land often described as being ‘at the end of the world’ has only grown with time.

I have no documents that identify me as being Chilean, but since when was that necessary to claim to belong to a culture that is also part of my own? It is for having lived the early stages of my youth in Santiago, which witnessed and influenced the formation of my social and political consciousness, that Chile uprooted some of my Lebanese and Arab roots to plant some of its own. This isn’t an issue of a confused identity, but a richer one, of which Chile forms an important part. 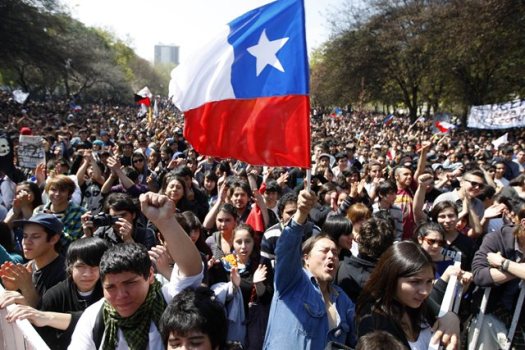 “There is no going back from here”

From 1988-1994, I lived during one of the most important eras of contemporary Chilean history. I witnessed part of the Pinochet dictatorship and the first stages of one of the most notable transitions – or rather returns – towards democracy in the world. In the wake of the 1988 referendum (on whether Pinochet should extend his rule for another 8 years), I learned what the political repercussions of the word ‘yes’ would mean for the country, and the hope and uncertainty of the word ‘no’. I saw how people moved from facing law enforcement officers as a threat to looking at them as their allies. I understood the difficulty, not the impossibility, for a nation to decide on its own form of government and the long road ahead of a more just future. With time, I realized how far Chile had developed politically, economically and socially. Chile did and keeps on doing something right. There is much left for it to do, but what is clear is that there is no going back from here…

One of the most important reasons behind the strength of Chilean democracy is that it had the courage to face its past. This hasn’t only been taking place in the courts of law – as with the attempt to try Pinochet and the trial of many others involved in the regime – but for taking the time to remember, understand and face the dictatorship in all its aspects in a way for it to never happen again. There is no right or wrong way to undertake a transition, the essential is to start it and have the will to carry the process of opening up and properly healing all the wounds  until the very end.

The way in which Chile – being a major exporter of goods and services itself – engaged in a full-fledged process of truth and reconciliation (most notably through a national commission carrying the same name), may be one of its most important exports. What’s more, Chile was able to make use of what the dictatorship left behind – solid infrastructure, public institutions and armed forces, as well as economic sectors with global competitive potential – for the benefit of the entire population. Many other countries have found it very challenging or have simply refused to walk the road of national reconciliation, without which it is impossible to build a sustainable and prosperous future. This “success story” is also the best way Chile defeated the dictatorship and those who facilitated and supported it.

Between Chile and Lebanon

The case of Chile becomes much more admirable when compared to a place like Lebanon. While the case of Lebanon becomes much more disappointing – not to say tragic – when compared to a place like Chile. Although their circumstances differ substantially, both countries went through bloodily painful eras, whereby their respective regional geopolitics colluded with internal politics and interests. The tragedy of both our countries started almost at the same time (Chile’s military coup that brought Pinochet to power in September 1973, while the Lebanese Civil War erupted in 1975) and also ended around the same time (the dictatorship ended in March 1990 and civil war in October 1989). Only that in Chile, the process of truth, justice and reconciliation already started, and in Lebanon, nothing of that sort seems to be in the works in the near future. The more that process takes to happen, the more our social, political, and economic problems worsen, sectarianism increases, and it is as if the war never ended. Just as the success of Chile’s transition has defeated those who wanted to destroy Chile as a democracy, Lebanon’s inability to follow the Chilean example shows that it has yet to fight its own demons (feudalism, corruption, sectarianism) and regional and international powers that do not tire from meddling in our business, partly because we let them. The unprecedented wave of demonstrations taking place in Beirut today – unleashed by the garbage crisis (see Eye on the East’s post about the crisis here) – provides much hope that perhaps the Lebanese have finally been able to transcend those same demons to start building a genuine nation. But the road is long and we have a long way to go before we can be sure that there’s no going back…

“By Reason of by Force”

“It is the duty of all Chileans to prevent what is narrated in this book to be repeated,” says politician Sergio Bitar (of Lebanese-Syrian descent) in his book Isla 10, whereby he tells the story of his arrest, along with dozens of other political prisoners, in the immediate aftermath of the military coup. “I do not want my children to go through the same thing, and this is only possible by relating the story as it happened and striving for justice.” Nothing indicates that so much violence and hatred will be relived again, if only because of all the efforts undertaken to heal the wounds of the past and move on. Chile’s coat of arms, proclaiming “by reason or by force,” doesn’t bode well for the future. However, I am certain that when it comes to “by reason or by force,” it is more about Chile’s will to never go back and being able to export their story…

There are many great movies about Chile, but two came to mind while writing this post, No about the 1988 referendum and Dawson Isla 10, based on Sergio Bitar’s book. I highly recommend them.